For years I have daydreamed about dining at Jesmond Dene House. The award wining restaurant at this independently owned boutique hotel has an impeccable reputation and although a two course dinner can be enjoyed from as little as £19.50 (5-7pm) it is the indulgent eleven course tasting menu that I’ve had my eye on. 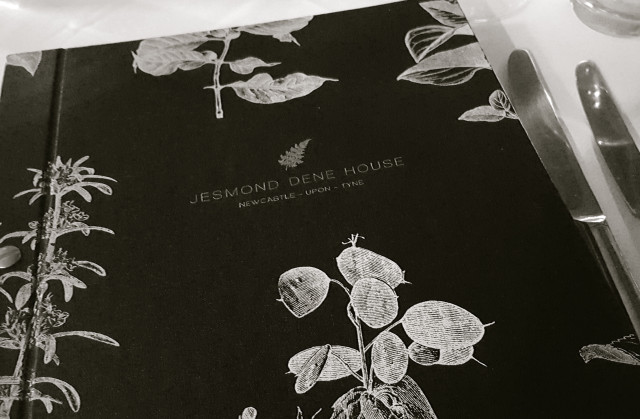 I finally managed to fulfil my foodie ambition in December and it did not disappoint! If you’re looking for somewhere special to spoil a loved one, a place to celebrate in style or you’re simply a fan of fine dining then I can highly recommend Jesmond Dene House. 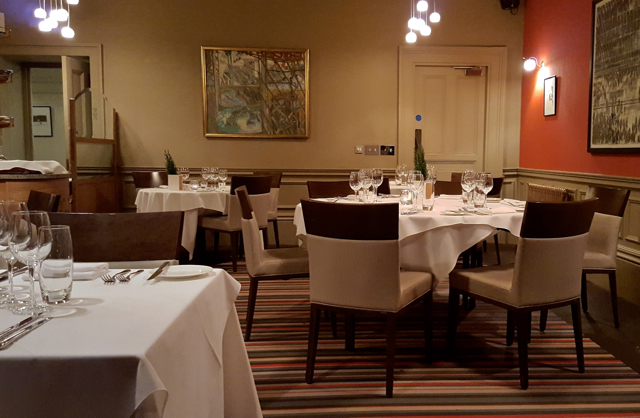 My only regret was that I didn’t take a better camera, I didn’t really want to ruin the experience by getting out my dslr every time a course was served so I opted to take sneaky phone pics instead. The images below don’t really do the food justice, every mouthful took my tastebuds on a delightful adventure.

Here’s a run down of our epic feast… 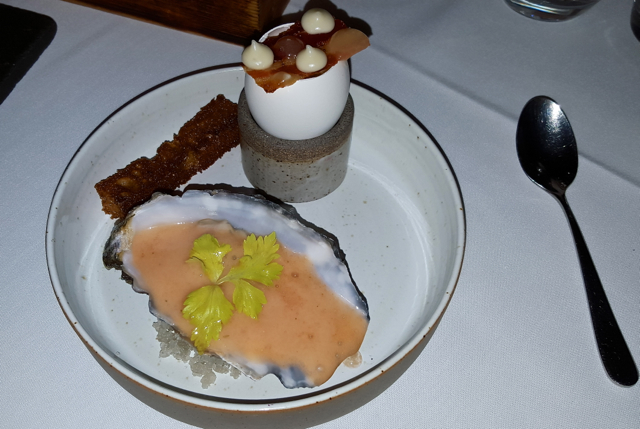 This trio of tantalising treats got the meal off to a perfect start. The oyster was delicious and the truffled egg royale had us both saying ‘wow’ several times. It was rich, creamy and very luxurious. There was a piece of crispy fried toast which we used to scoop out every morsel from the egg shell, it was the poshest dippy egg and soldier I’ve ever had that’s for sure! 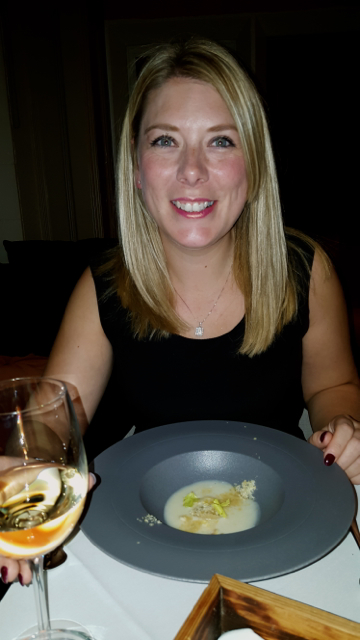 I was a little concerned about having pasta so early on in the meal as it usually bloats me but of course with this being a tasting menu it was only a small portion. Small but perfectly formed! I am a big blue cheese fan and was pleased to discover that it was the most powerful flavour in this dish, the apple and chestnut flavours were more subtle but the balance was spot on. 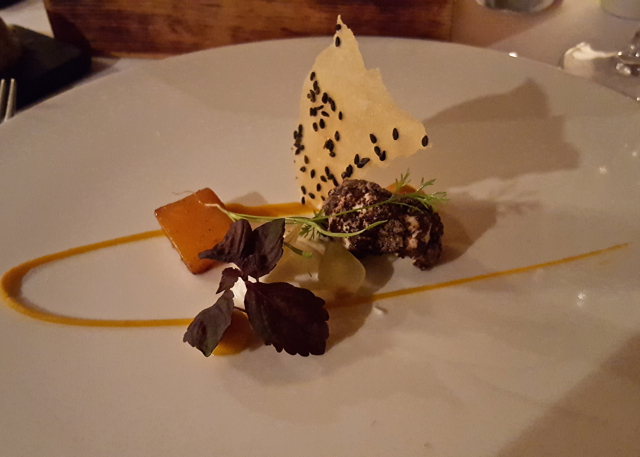 More cheese, much to my delight! This dish was so pretty and the combination of ingredients was sublime. I loved that the honey was produced locally too. I’ve actually tried to re-create a version of dish at home, I was not successful, guess I’ll leave it to the experts from now on. 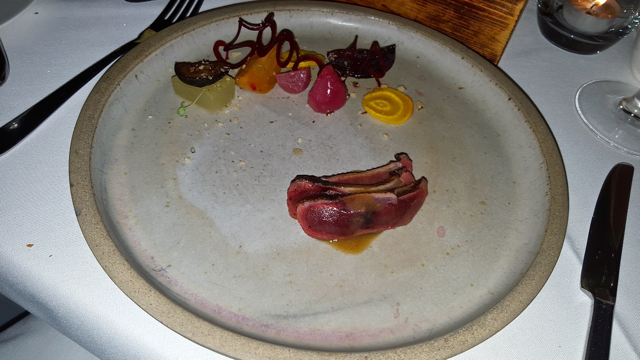 Anticipation for this course was high, James and I have both tried pigeon before and loved its unique flavour. I have to admit at being slightly disappointed by the presentation though, the pigeon was cooked perfectly pink but it looked so lonely on that huge plate! I think the vibrant colours of this course would have shone much more brightly if they were served in a more thoughtful manner, delicious none the less. 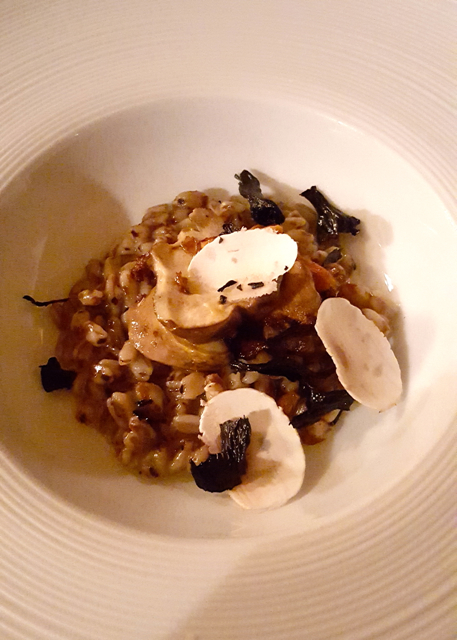 I’ve yet to meet anyone who got excited over pearled spelt but add wild mushrooms and truffle to that boring old wholegrain and you’ve got yourself a rich, mouthwatering dish that tastes as comforting as it looks! James is still talking about this course weeks later!

By the time our scallops arrived I was starting to get quite full but the plump little shellfish just looked so yummy served in its pretty fan shaped shell, how could I resist? I think James was a little bit disappointed when he saw me devour it as he was half expecting me to offer it to him. We both agreed that we could have happily ate more of these. 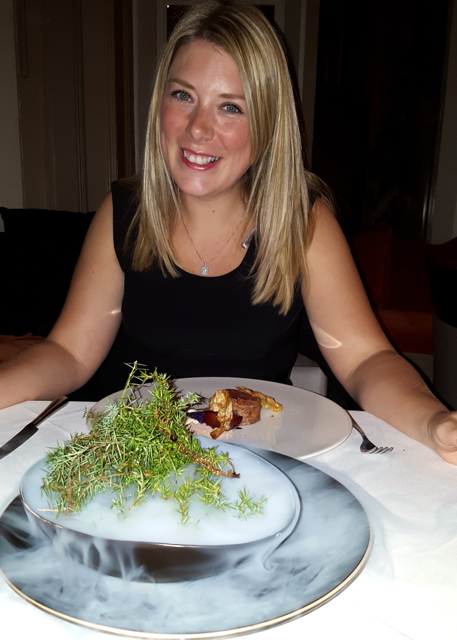 Thankfully we had a welcome break after the scallop, just enough time to order more wine (more on that later!) and work up an appetite for the star of the show… the venison. I guessed that something special was about to happen when our waiter cleared all the decoration and condiments from the table. He was making room for the dish you can see above which sat in between James and I, releasing the most amazing woody aroma of juniper berries. I’m pretty sure we given a detailed description of this part of the meal but I have to be honest, it kind of went in one ear and out the other as I oooed and aaahed over the sight in front of us and tried to get a couple of photos before the visual effect came to an end.

The food itself was absolutely divine and exceeded all expectations. The venison was cooked rare, just as it should be as it’s so lean but it was well rested so it melted in the mouth. This course was a delight for all the senses!

After the venison, it was the turn of the desserts (not one, not two, but three of them!) and my sweet tooth could not have been happier. The sticky carrot cake was moist and covered in a layer of whipped cream cheese that was so delicious I would have licked the bowl had I not been in public! 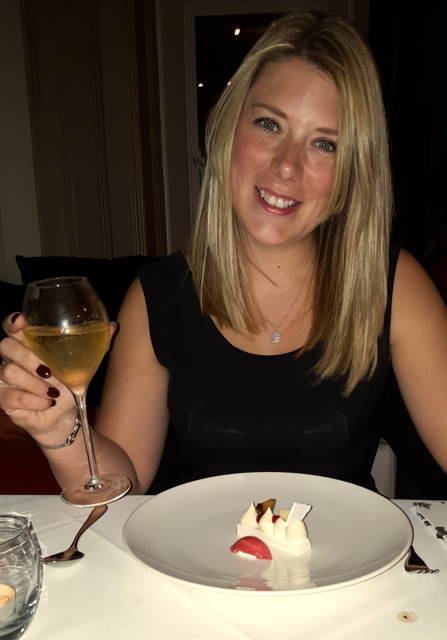 The zingy flavours of this dish refreshed the palette and went perfectly with my tipple of choice … a Pol Roger demi sec (£12.50 a glass). Pol Roger is the house champagne at Jesmond Dene House and was apparently a favourite of Sir Winston Churchill who once famously said ‘My tastes are simple, I am easily satisfied with the best’. I’ll drink to that! 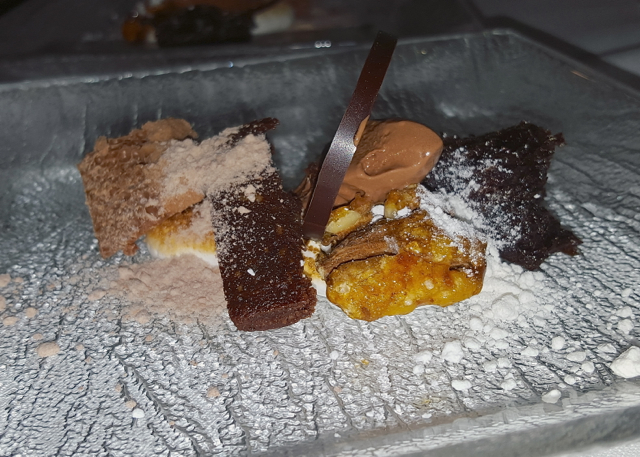 Last but not least, we were served up a plate of sweet, rich, chocolately treats that were so good I’m drooling just remembering it! The aerated chocolate had the texture of an Aero chocolate bar, the walnuts were still crunchy but with the stickiness of the caramel they tasted more like nut brittle, the sorbet was just to die for and the whole combination resulted in some rather inappropriate yummy noises for which I’m #sorrynotsorry. 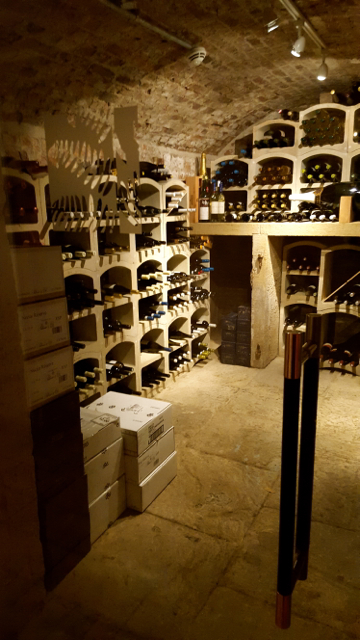 James and I decided against the optional wine flight that is available to accompany the tasting menu (an extra £55pp) mainly because I’m a bit of a slow drinker and would end up drinking the wrong wine with each course and I’m not really a fan of red which would have undoubtedly have appeared with the pigeon and venison. Instead we enlisted the help of sommelier Danny who helped us pick out a wonderful bottle of Chardonnay and then several other wines by the glass. 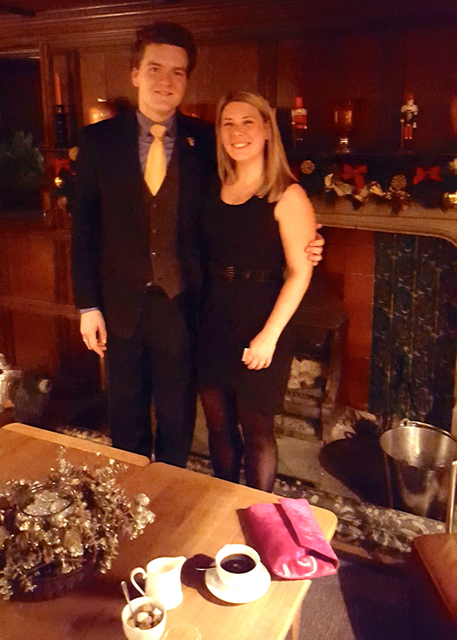 Danny really is an expert and we loved his stories about where each of the wines had come from and why they would compliment our food. When I asked about the difference in the various champagnes on offer he was quick to offer samples (top marks for that) and he even joined us for a whiskey (on him) in the lounge afterwards. We can’t thank Danny enough for making our evening  feel even more special than it already did!

I think it’s safe to say that our dining experience at Jesmond Dene House is one we will remember for a long time to come. The tasting menu is £75pp (or £130pp with wine pairing) so it’s obviously not something we’ll be indulging in on a regular basis but for a special occasion it definitely gets the thumbs up from us. Speaking of which, Valentine’s Day is just around the corner and Jesmond Dene House have put together some celebratory menus and offers which are well worth a look: www.jesmonddenehouse.co.uk/valentines-day-at-jesmond-dene-house/

Wow this looks amazing Rachel – what a feast! We enjoyed an a la carte dinner at JDH for my mum’s 50th birthday and it was superb – the staff really know their stuff and are always willing to share their knowledge or recommendations in a non-pushy way which I love. I’m not sure which course of yours I like the look of the best! We stayed at Gidleigh Park for Steve’s birthday and added the wine flight to our package on one night and selected a bottle of champagne on the second – adding the wine flight really made… Read more »

We are more than a little obsessed with JDH and the 11 course taster menu looks so good! I may have to leave the valentines page open somewhere as a little hint 😉

This looks amazing ! I have yet to visit Jesmond dene house , I really must visit soon xx

Jesmond Dene – now there’s a name from my past. I was at Uni in Newcastle many moons ago and walked via Jesmond Dene to get to lectures! #BrillaintBlogPosts

A Guide to the Best Hotels in Newcastle | Life In Geordieland

[…] menu in the restaurant and it was a gastronomic feast I’ll never forget! Read my full review HERE. Jesmond Dene Rd, Newcastle upon Tyne NE2 2EY, […]

[…] James and I felt very lucky when the invitation came through to sample the new a la carte menu in the award winning restaurant. We’d been promising ourselves a return visit ever since we enjoyed an amazing taster menu there last year (you can read about that visit in this review). […]

Festive Afternoon Tea at Jesmond Dene House (Plus your chance to win!) | Life In Geordieland

[…] I had hoped we might be seated by the real crackling fire in the cosy bar area but it was quite busy so we were shown to the formal dining room instead. (Read about our previous dining experiences in this environement HERE and HERE). […]

An Afternoon of Culture at Laing Art Gallery

Thaikhun has Arrived at Intu Metrocentre

A Visit to Meet and Treat Cafe

(AD) My First Visit to Newcastle after Lockdown

wpDiscuz
11
0
Would love your thoughts, please comment.x
()
x
| Reply
This website uses cookies. By continuing, you agree to their use. Find out more, including how to control cookies.