in Festivals and Events 8

The North East has been basking in sunshine over the last few days and it’s put me in a lovely sunny mood! It’s also got me looking forward to some of the exciting open air music events that are planned in the region this summer. Here’s a run down of the ones I know of, if you think I’ve missed any, let me know! 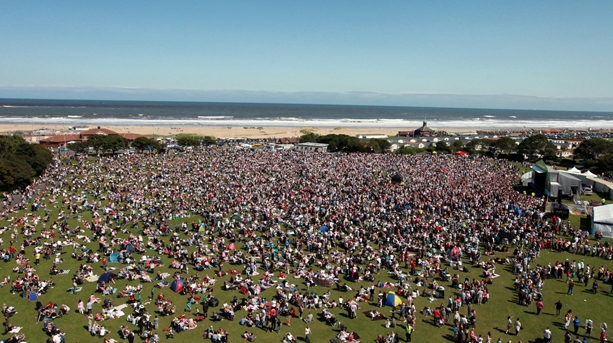 Who’s On? There’ll be a variety of outdoor gigs and events to look forward to in South Tyneside this Summer. Every Tuesday and Thursday evening between 2nd – 25th June talented local acts and more well-known bands will perform at the open air Amphitheatre overlooking Sandhaven Beach, full line up HERE.

During July, the Sunday concerts in Bents Park will attracts crowds of party go-ers. The line up for the first one on Sunday 10th July should get X Factor fans excited, Alexandra Burke, Ben Haenow and Reggie ‘n’ Bollie will all be heading to the stage!

If classical music is more your thing visit Proms in the Park on 3rd July. One of the UK’s leading opera singers, Bib Heal will be singing his heart out in the beautiful surroundings of South Marine Park.

How much? It’s all FREE. Not even joking!

How do I book? No need to book, just pack a picnic, turn up and enjoy. For more info and further updates follow South Tyneside Festival on Facebook and Twitter.

Me with my favourite VW, Rosie!

Who’s on? Mighty Dub Fest is, as the name suggests, more about the motors than the music but I love vintage vehicles as much as I love vintage music so this event looks right up my street. As well as family entertainment, a show and shine event and lots of trade stalls there’ll be live music from energetic pop and rock bands including Mighty Dub Fest veterans One Eyed Jack.

Where is it? The venue is none other than Alnwick Castle in Northumberland, one of England’s finest castles, be sure to take a camera!

How much? £30 for the full weekend including camping. Day tickets are also available from a fiver!

How do I book? Get all the details at www.mightydubfest.co.uk/tickets

Who’s on? There are four concerts planned this year with some real crowd pleasers on the bill. The legendary Bryan Ferry on Thursday, Will Young on Friday, James Bay on Saturday and Lulu on Sunday plus big name support acts too! All we need now is the sunshine!

Where is it? In the spectacular grounds of Tynemouth Priory & Castle, North Tyneside overlooking the beautiful King Edwards Bay.

How do I book? Ticketmaster or See Tickets

Who’s on? There’s music across three stages plus kids zones, workshops, street theatre, comedy and gourmet catering. This is the perfect small festival for families with music from The Coral, Grandmaster Flash, Neville Staple Band, Too Many T’s, Frankie and the Heartstrings and plenty more!

Where is it? The pretty Northumberland town of Corbridge is just 18 miles west of Newcastle.

How much? Tickets are around £30 but some types are already sold out so be quick! Under 10’s go free!

How do I book? Go to www.corbridge-festival.co.uk/tickets

Who’s on? Newcastle Pride returns for its 9th year with an extended event over 3 days, celebrating LGBT communities across the region. The line up for this years party is bigger and better than ever with loads of well known and up and coming acts. M People’s Heather Small and X Factor and I’m A Celebrity star Jake Quickenden are headlining. Pop stars 5ive and Sonia are also on the bill along with clubland favourite Tina Cousins, Scottish singer Carol Laula, local lasses NE Girls, X Factor finalist Keira Weathers, Britain’s Got Talent star Calum Scott and Sunday for Sammy star Lorraine Crosby, who is best known as the female vocalist on Meatloaf’s I’d Do Anything For Love.

Where is it? As part of the festival there will be events across the city, including a vibrant and colourful parade but the live music will take place on Newcastle’s Town Moor.

How much? Another freebie but donations welcome so look out for fundraisers shaking their collection buckets and chuck in what you can.

How do I book? You don’t need tickets but for more info check out www.northern-pride.com

Who’s on? This one day festival has a funky line guaranteed to get people dancing. The Brand New Heavies are headlining and after seeing them perform at Gateshead Jazz Festival a couple of years ago I can promise you this event will have the feel good factor. Smoove and Turrell, local connoisseurs of funk, will also be taking to the stage, these guys aren’t my favourite local band for no reason, let me tell you! If that wasn’t enough, Shola Ama and Alison Limerick will be reminding festival go-ers of their hedonistic clubbing days back in the 90’s and there’ll also be a Battle of the Bands! Whoever put this line up together has my kind of taste in music!

Where is it? Sunniside is on the Eastern side of Sunderland city centre, not far from the train station. I actually used to live there and the area has some great bars and restaurants nearby.

How much? It’s just a tenner to see some of the UK’s best funk and soul acts.

How do I book? Tickets and full info at www.sunnisidelive.co.uk

Who’s on?  Get set for a sizzling celebration of Americana music with this three day jamboree that will host exciting performers from both sides of the Atlantic. Nashville’s Striking Matches will be making an exclusive appearance, alongside the UK’s Ward Thomas.  Vintage and rockabilly fans will be pleased to hear that Imelda Mayand will be performing there’ll also be music from Mary Chapin Carpenter, Gretchen Peters plus many more big names in Bluegrass, Country and Gospel.

Where is it? In and around the stunning Sage Gateshead, on the south bank of the river Tyne.

How much? Ticket prices vary but you can enjoy the performances on the outdoor ‘Jumping Hot’ stage for free!

How do I book? You can just turn up to the free events but for more info and headline tickets go to www.sagegateshead.com

Who’s on? Three very exciting acts are heading to Newcastle for an epic weekend of outdoor gigs. First up, Fatboy Slim will be heading to the Toon for his birthday weekend on Friday, July 29. I read an interview with him about the event and he described it as “A mass science experiment to explore the effects of collective euphoria and escapism” so get ready to raise the roof (oh, there isn’t one!)

Ocean Colour Scene will be on the stage on Saturday 30th in a special concert that will see them perform their album Moseley Shoals in its entirety, so excited about this, in my opinion it was one of the best albums of the 90’s! Don’t believe me? Check out the video below. Oh, and local lads Maximo Park will close the weekender with a gig on Sunday 31st July.

Where is it? No need for wellies at these gigs, Times Square is the open space in front of the Centre for Life in Newcastle City Centre, a stones throw from the train station.

How much? Tickets for each gig are sold separately from around £25.

How do I book? For Fatboy Slim tickets go to www.seetickets.com/event/fatboy-slim/times-square/982968. For Ocean Colour Scene and Maximo Park it’s www.gigsnortheast.co.uk

Down to the Woods Festival: Saturday 13th & Sunday 14th August 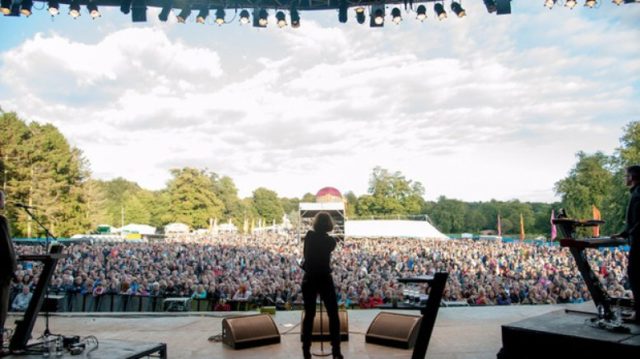 Who’s on? With an eclectic and slightly alternative collection of artists on the bill, this looks like a festival well worth forking out for. Primal Scream and Chase and Status are the most well known names on the line up and these will perform alongside Catfish and the Bottlemen, The Sunshine Underground, Lucy Spraggan, Clean Cut Kid, Echo and the Bennymen and loads more.

Where is it? In the grounds of Hardwick Hall, County Durham, among 120 acres of pretty parkland.

How much? £99 for an adult weekend ticket.

How do I book? Head to www.downtothewoodsfestival.co.uk

UPDATE: DOWN TO THE WOODS HAS NOW BEEN CANCELLED. 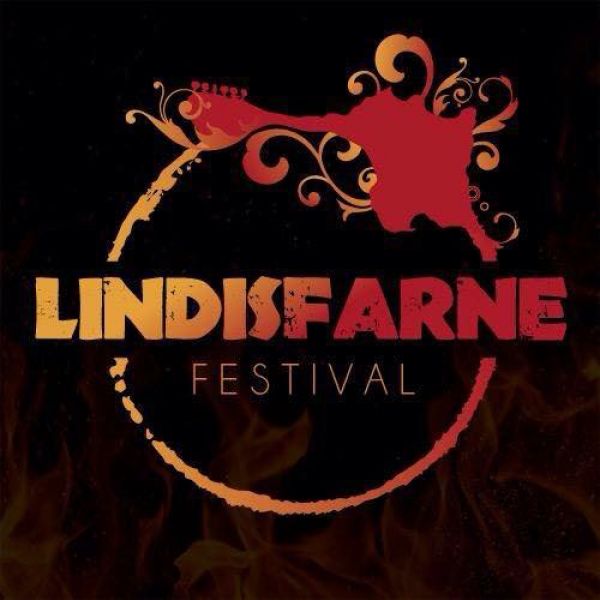 Who’s on? I may have left the best till last, so excited about this epic line up… Reef, British Sea Power, Beardyman, Little Comets, The Cuban Brothers, James Taylor Quartet, The Baghdaddies, Indigo Velvet and at least a dozen more!

Where is it? Beal Farm is the site for this hidden gem of a festival by the coast! It’s just a few miles off the A1 towards Holy Island and yards from the Lindisfarne Causeway, the backdrop couldn’t be more spectacular!

How much? Weekend tickets including camping are £90, early bird prices and payment plans are currently available.

How do I book? All the info is at www.lindisfarnefestival.com

So there you have it, 10 magnificent music events to put in your diary this summer! Anyone else feeling a little bit giddy?

Gutted I didn’t know James Bay was on in Tynemouth on my birthday! Think I’m going to have to go scouting ebay/gumtree for some tickets!x

Don’t forget Tynemouth Fake Festival as well, that is always good! I’ve lived in the north east all my life and hadn’t heard of most of these, I will have to look into them some more. I am gutted that James Bay sold out though x

[…] Doors opened at 9pm for the show with Larry Dean, an award winning Scottish stand up who was debuting his Edinburgh Fringe Show and launching the start of Newcastle Pride. […]

Festive Events in the North East You Need To Book Now (Be...

The Lindisfarne Gospels in Durham

Get Ready for the NYE Winter Carnival